Posted at 09:38h in Elbow, Repair by dev@alphabetsy.com.au

Surgical repair of the distal biceps tendon rupture can be a challenge, especially when patients present with a retracted tendon.

The tendon stump is often difficult to find and retrieve. In this aticle, we described a technique using ultrasound imaging at the start of the procedure. Under ultrasound guidance, a breast biopsy needle is used to help localize and mark the retracted tendon edge as well as the distal rupture site. Ultrasound is also used to mark important neurovascular structures at risk to help speed up exposure and avoid complications.

Distal biceps tendon rupture is historically known to be a rare injury; however, more recent literature has proved that its incidence is higher than what was previously reported.8,11 Most patients are male in their fifth decade. Smoking, manual labor, weight training, and the use of anabolic steroids are among known risk factors. Smokers have 7.5 times higher risk of injury.11 The mechanism of injury involves an excessive eccentric force applied to a flexed elbow. Patients experience a pop and a severe sharp pain at the time of injury. Clinical signs include ecchymosis, palpable defect, and change of muscle contour (reverse Popeye sign).

The hook test is one of the useful clinical tests for complete rupture of the distal biceps tendon. O’Driscoll et al described the test and reported 100% sensitivity and specificity.10 It is performed by asking the patient to keep the forearm fully supinated and elbow 90 degree flexed while the examiner tries to hook the tendon from its lateral edge. Ultrasound and magnetic resonance imaging can add valuable diagnostic information.4,5,9 A number of clinical and biomechanical studies have favored surgical treatment over nonsurgical treatment to restore flexion and supination strength.1 A number of surgical techniques have been described to reattach the detached distal biceps.

There is some debate regarding anatomic vs. nonanatomic repair, single vs. double incision exposure, and which fixation method is superior.1,13 However, one of the major potential challenges with any of the techniques is identifying and exposing the retracted tendon edge as well as its attachment at the radial tuberosity. This particular step puts some key structures at risk including brachial artery, median nerve, the posterior interosseous nerve, basilic vein, and cubital vein. In our experience, this surgical step is often time-consuming and anxiety-generating and involves an extended surgical incision.

In this article, we described a technique to identify and mark retracted biceps tendon proximally and the radial tuberosity distally using ultrasound imaging. The aim of this technique was to introduce more precision in identifying key structures, reduce operating time, and avoid potential complications.

We perform the procedure under regional interscalene anesthesia block and light sedation. Subsequently, the patient is positioned supine with the upper limb resting on a hand table without a tourniquet application. The shoulder is placed in 90 degrees of abduction, the elbow is fully extended, and the forearm fully supinated. The arm is washed with betadine-soaked sponge (prescrub).

Ultrasound-guided identification of the tendon edge and radial tuberosity

Similarly, another wire is used to localize and mark the distal edge of ruptured tendon at the biceps insertion (radial tuberosity) through the bicipital sheath (Fig. 2). The ultrasound is also used to mark the neurovascular structures at the cubital fossa using a marking pen. Structures that could be identified include brachial artery, median nerve, basilic vein, and cubital vein. 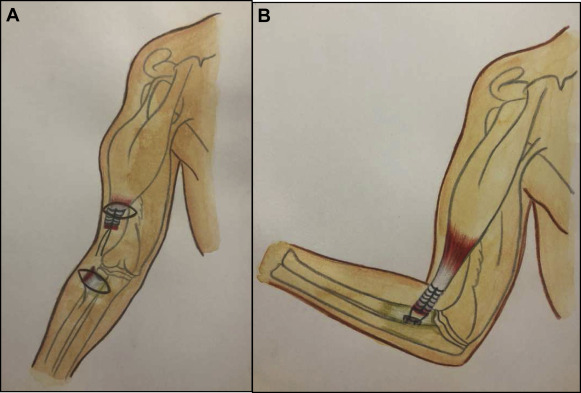 Tendon fixation is performed using the BicepsButton and Tension-Slide Technique (Arthrex Inc., Naples, FL) The tendon edge is whip stitched using a FiberLoop (Arthrex Inc., Naples, FL) starting proximally to distally. The loop is cut near the end. The radial tuberosity is derided of any remaining soft tissue. The forearm is fully supinated, and a 3.2-mm drill is used to drill a bicortical tunnel through the radial tuberosity. An 8-mm reamer is used to drill a unicortical tunnel over the 3.2-mm guide pin. Both the pin and reamer are removed. The two fiberloop ends are used to pass the tendon distally through the tendon sheath and come out from the distal wound. The two ends are threaded into the BicepsButton; one suture end is threaded into one side of the button and back through the other side, and the other suture end is passed similarly starting on the opposite side. Ensure that the button is sliding freely on the sutures. A button inserter is used to pass the button through the bone tunnel (Fig. 4). Once the button is flipped, the two suture ends are pulled sequentially to dock the tendon edge into the bone tunnel. The elbow is flexed slightly to ensure the tendon is fully seated in the tunnel. A free needle is used to pass one suture limb through the tendon which is then tied to the other suture limb. The wounds are washed and closed in layers. Bulky soft dressing is applied with elbow in flexion.

Figure 4(A) Ultrasound image postop showing the reattached biceps tendon filling the tendon sheath at the site of insertion, (B) postop x ray of the elbow.

The elbow is not immobilized, but the bulky dressing helps to slightly restrict elbow movement. The patient is seen one week postoperatively for dressing and suture removal. Postoperative x-ray is performed to check the position of the button. Subsequently, the patient is advised to start active elbow flexion/extension and forearm supination/pronation gradually. The patient is seen again at 6 months after surgery for final assessment including performing an x-ray.

At the time of writing this article, patients were interviewed via phone and asked the following questions: (1) How is your elbow overall? (bad, poor, fair, or good), (2) How would you rate your range of motion compared to your other side elbow? (40%, 60%, 80%, or 100%), (3) How much pain do you have? (none, mild, moderate, or severe), and (4) Have you had any complications? (including lose or change of sensation in the forearm).

We have performed this procedure technique on 4 patients. They were followed up for 6 months and given a phone call at the time of writing this article. The mean age of the patients was 47 years. The average time from injury to surgery was 21.5 days. The average surgery time from incision to closure was 76.3 minutes. The average follow-up duration was 20.5 months. At the final follow-up phone call, the patients had good overall satisfaction about elbow function, regained 80% to 100% of elbow range of motion compared to the contralateral side, and reported mild to no pain at the elbow. One patient developed small heterotopic ossification, but this heterotopic ossification did not affect his range of motion or his overall satisfaction.

This article describes using ultrasound during surgery to identify and tag the retracted distal biceps tendon proximally as well as marking the tendon sheath and radial tuberosity distally. Ultrasound was also used to mark the neurovascular structures at the cubital fossa. To our best knowledge, ultrasound guidance in distal biceps tendon repair has not been described in the literature before.

Ultrasound has been proven to be an effective diagnostic tool for distal biceps tendon rupture in previous literature.12 Lobo et al found that ultrasound has high sensitivity, specificity, and accuracy in the diagnoses of complete ruptures.9 Ultrasound imaging is quick, has noninvasive modality, and does not carry any complication risk.

We found that using ultrasound guidance and breast biopsy needles at the start of the surgical repair of retracted distal biceps tendon to be a very helpful adjunct to avoid major neurovascular structures and to identify both the retracted stump and the location for the reattachment at the radial tuberosity of the proximal radius.

Funding: No funding was disclosed by the authors.

Conflicts of interest: George A.C. Murrell is a paid consultant and has research funding from Smith and Nephew and is also on the editorial board of the following publications: Journal of Shoulder and Elbow Surgery; Shoulder and Elbow; and Techniques in Shoulder and Elbow Surgery. The other authors, their immediate families, and any research foundation with which they are affiliated have not received any financial payments or other benefits from any commercial entity related to the subject of this article.